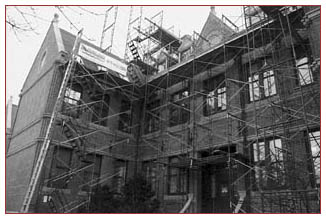 A turn-of-the-century school building, the Willard Building had been converted to office space. The building required exterior waterproofing and complicated restoration work. Remedial repair measures had previously been taken during the conversion but were unsuccessful in solving the water infiltration and actually accelerated the deterioration of the masonry structure.

Project Description
Water damage had caused considerable structural deterioration to the building’s 10 gables. The structural damage to the gables’ parapets extended 18 inches below the roof line. The granite coping stones which capped the parapets weighed an average of 500 lbs. As a result of the deterioration, stones were subject to fall off the building, as the brick masonry beneath also had significant deterioration. Metropolitan was contracted to handle the entire restoration project. 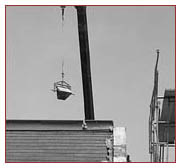 Since the coping stones were keyed in to the parapet, it was necessary for Metropolitan to devise an innovative way to take the granite coping stones off the parapet while keeping the structural wall intact. Using a 40 ton crane and a specially devised clamping apparatus, Metropolitan was able to keep the wall intact during what was a very delicate operation. Stones had to then be reconstructed on the gables after rebuilding the deteriorated masonry parapets. All mortar for the project was color-matched to existing building mortar.

Upon completion of the structural work and reconstruction, a phased construction of the roof was undertaken. The project features the installation of an entirely new roofing system with an intricately designed copper gutter system. The copper gutters, which featured OGEE profiles, were fabricated and reinstalled. Metropolitan is now in the final phase of installation of the new composite shingle roofing system for the historic building. The complex and intricate roof layout features numerous dormers, skylights and levels, adding to the complexity of the roofing project. In conjunction with the fabrication and installation of copper gutters, Metropolitan has installed an ice barrier at the eaves of the new roof. An ice and water shield membrane (a relatively new roofing material) self-adheres and seals to the roof sheathing at the eaves. The membrane, which is concealed under the new roofing, is specially designed to prevent water from backing up into the building as a result of ice damming.

The Willard Building has remained occupied during the entire reconstruction process, and Metropolitan has handled the entire restoration project in a manner so as to not disrupt the building’s high profile tenants.

Special Project Features: Lime-based Mortar Batched On-Site To Match Original Mortar
Metropolitan took special measures in mortar-matching to the original mortar of the historic structure. The Willard Building, like most historic brick structures built in that era, was constructed using lime-based mortar, which is soft, waterproof, and flexible (consisting of no Portland cement). Lime-based mortar is compatible with the brick of that era which was not as hard as current day brick. Lime mortar is flexible in nature. It’s properties, in fact, allow it to move, breathe, and repair itself, as water works with the mortar to reactivate the lime.

Metropolitan matched the building’s mortar for compressive strength, porosity, and so as to be compatible with the porosity of the brick. Mortar was batched on-site and consisted of a high lime content mix with color added. Consistent batching techniques were employed throughout the project.